Vodafone Idea Ltd (VIL) – is it a Safe Bet? A brief analysis

Vodafone Idea Limited (VIL) is one of the leading mobile service providers in India, with a 29% market share (as on Sept 30, 2019). VIL is an integrated GSM operator offering 2G, 3G and 4G, 4G+, and VoLTE mobile services under two brands named Vodafone and Idea. As of 31 December 2019, VIL has a subscriber base of 332.65 million which makes it the second-largest mobile telecommunications network in India. Vodafone group holds 45%, Aditya Birla Group holds 26% and the rest is held by the public.

The financial position of VIL is deteriorating YOY and the pending AGR dues have further stressed the entire telecom sector with VIL, being hit hard. DoT’s demand Rs 58,254 crores including interest and penalties from VIL as AGR dues and VIL has paid Rs 6854 crores of its dues.

VIL has also suffered a loss of more than 8 crore subscribers during 12 months through December 2019 trimming its revenues and profitability.

There is recent news circulating of Google buying a 5% stake in VIL which resulted in a rally in its share price. However, VIL has clarified that there is no such proposal being considered by the board. The Supreme Court has adjourned the hearing of AGR case to June 18 and has directed the telcos to file an affidavit within 3-4 days but VIL has highlighted its inability to file an affidavit in a short span and also indicated that VIL won’t be able to provide bank guarantees for AGR dues.

The share price of VIL is showing fluctuations in the last two weeks due to speculative news circulating in the market about its stake. The share price rose to Rs 10.15 recently from Rs 3.86 in March’20, almost 3 times! Fluctuations would continue to be seen in VIL until it reaches its correction level due to the sector vulnerability. 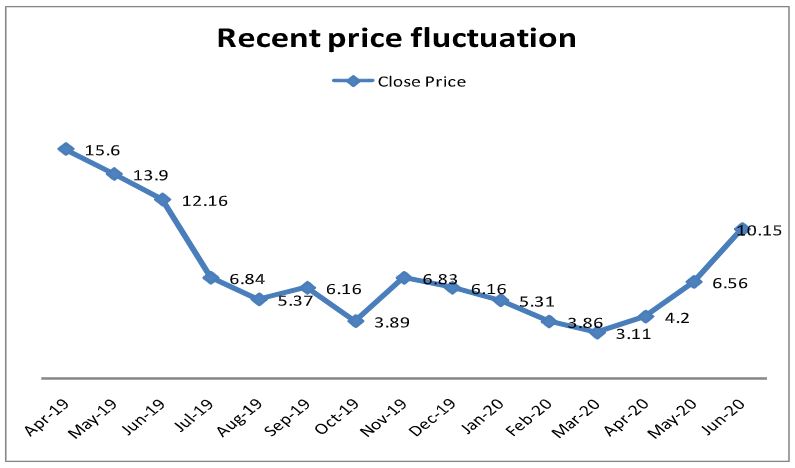 In a nutshell, VIL is sailing under dark waters signaling weak fundamentals of the company, sensitivity of the sector, and tough competition from the largest telco Jio. Among all the Telcos, VIL has the largest liability in the form of AGR dues and the VIL balance sheet is not that strong to pay exorbitant dues. There is a cloud of uncertainty over VIL’s ability to continue as a going concern and to generate adequate cash to pay off its AGR dues and refinance its liabilities, guarantees as they become due. Hence, it is better to refrain from investing in VIL until there is some clarity on its AGR dues unless the investors have a high-risk appetite and a speculative mindset.

Avenue Supermarts- Weak Q1 results, does it impact the stock in long run?

How Yes Bank FPO spoiled the party for its existing shareholders

Reliance Retail acquires Future Retail
Post Views: 4,494
Share This Post
About CA Priyanka Choudhary Jain 70 Articles
Chartered Accountant & an experienced credit analyst. She has worked with CRISIL as a Senior Credit Analyst on rating assignments including business & financial analysis in Corporates as well as the Public Finance Sector. Please mail your queries, feedback, and any suggestions to her on info.financepost@gmail.com
Website Facebook Twitter LinkedIn Xing

Avenue Supermarts Ltd.- is it a crown of organized Retail?

Avenue Supermarts- Weak Q1 results, does it impact the stock in long run?

Share This PostAvenue Supermarts- Weak Q1 results, does it impact the stock in the long run? Recent development D- Mart’s topline numbers have seen a decline on account of lower sales in Q1 FY 21. […]