Budget 2019 has brought in some important amendments. One of them is the amendment of Sec 194DA providing that TDS applicable on “income” from incurance company and not the gross proceeds. Let us understand this in detail.

As per the provision prevalent till 2019, any sum received under a life insurance policy, including the sum allocated by way of bonus on such policy, was exempt under section 10 (10D) other than—

(b)  any sum received under a Keyman insurance policy; or

(c)  any sum received under an insurance policy issued on or after the 1st day of April 2003 but on or before the 31st day of March, 2012 in respect of which the premium payable for any of the years during the term of the policy exceeds twenty per cent of the actual capital sum assured; or

(d)  any sum received under an insurance policy issued on or after the 1st day of April, 2012 in respect of which the premium payable for any of the years during the term of the policy exceeds ten per cent of the actual capital sum assured:“

As observed in (c) and (d) above, if a sum received during the year, under an insurance policy issued after 1st April, 2003

in respect of policy issued after 1st April, 2012 the premium paid for any of the years exceeds 10% of the sum assured

Then it is not exempt.

This also created confusion in the minds of few taxpayers on whether to tax the proceeds at the net or gross receipts.

The Finance (No.2) Bill, 2019 proposed the following amendments to section 194DA which removed all the confusion and mismatch,

Accordingly, TDS will be applied on the net of the amount being paid by the insurance company including a bonus if any and the premium paid by the policyholder and not on the gross amount.

After this amendment, there will be no difference in the income reported by the taxpayer in the return vis-à- vis the amount deducted by deductor reflecting in Form 26AS. 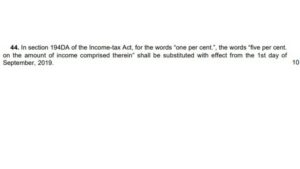 Share This PostCapital Gain tax on inherited property Overview When a person receives a property by inheritance or gift, there is no tax payable on inheritance. However, if he plans to sell the property obtained […]

When does RBI hike interest rate?

Share This PostWhen does RBI hike interest rate? Reserve Bank of India (RBI) is an apex bank or central bank in India. It controls the functioning of all other the banks in India to ensure […]

Let's help each other in this crisis.

Was late this time as I was ill. So no testing of site. Contact me for bugs/suggestions.