Basics of GSTR 2B

Overview of GSTR 2B

The new form GSTR 2B has been introduced on GST Portal.

The GSTR 2B was made available for the month of August 2020 and onwards.

The sample GSTR 2B is also available on the portal for the month of July 2020.

ITC matching was one of the main objective of the Government at the time of the introduction of GST.

Originally GSTR 1-2-3 have been proposed but could not be implemented.

The Form GSTR 2A was available but there was no compulsion for matching of ITC.

To facilitate the implementation of rule 36(4), new static form GSTR 2B has been introduced.

Salient Features of GSTR 2B

It will bifurcate the ITC into Available ITC and Not-available ITC. The not available ITC will be mainly on account of (i) Place of supply and recipients’ state is different and (ii) supplier has filed a return after time limit of section 16(4) i.e. next year September return.

The date of filing of return by the supplier will be reflected in GSTR 2B. It will help to trace the defaulting supplier.

Table 3A will reflect the ITC  available based on Invoices / Debit Notes and Amendments of both. It will cover ITC from registered person, ISD, import of goods and
supplies covered under RCM.

Table 3B will reflect the reversal of ITC required based on credit notes and its amendments.

Table 4 will reflect the details of ITC not available.

The ITC reversal and RCM liability is just indicative and one needs to discharge liability according to books of accounts.

Advantages of GSTR 2B

Easier to comply with rule 36(4) and calculate eligible ITC.

No need to download GSTR 2A of previous months.

Easy to track suppliers who default in filing of GST returns.

Disadvantages of GSTR 2B

It will be easy for the department to track non-compliance of rule 36(4) which itself is debatable/controversial.

The data in GSTR 2B is just indicative. However, the Authorities will adhere to the figures of GSTR 2B.

It will create unwarranted notices/litigation.

Detailed Analysis of GSTR 2B 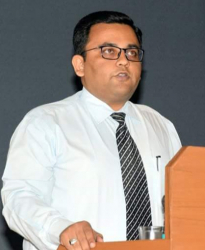 CA Abhishek Doshi
He is a fellow member of ICAI and commerce graduate. He is partner at K S D & Associates having offices at Rajkot – Gandhidham – Ahmedabad and has been in the practice since 2008, mainly engaged in the practice of GST (earlier Service Tax & VAT), Income Tax, Finance and Audit. He is regularly appearing before the adjudication and appellate authorities including CESTAT(Tribunals) for GST / service tax matters. He has delivered lectures on the topic of GST and service tax at seminars organised by branches of ICAI, trade bodies, various associations, and Service Tax Department. He is also a regular attendee of various Study Courses on Service Tax and GST conducted by BCAS, CTC, ICAI and other forums as Group Leader and Coordinator. He has been chairman of Rajkot Branch of WIRC of ICAI in the year 2014 and the branch has been awarded best branch award in the large branch category for the first time. He is member of Study Group on Indirect Taxes (Gujarat) formed by ICAI. He is also one of the empanelled faculty for GST by ICAI. He has also been associated as Mentor with GST World, a nationwide group of indirect tax professionals that aims at providing a comprehensive consultancy and litigation services for Goods and Services Tax to various corporates.