Goods & Service Tax is a trust-based tax regime structured in a manner to collect tax efficiently & reduce corruption from the economy. Under this system, an assessee is supposed to self-assess his returns and determine the tax liability without any intervention by the tax official. As it relies on self-assessment of the taxpayer/assessee, there is a robust audit mechanism in place to ensure compliance with the law.

What is GST Audit?

which are maintained or furnished by the taxpayer/assessee under the GST. The above documents are properly assessed &examined to verify the correctness of

What are the types of GST Audit? 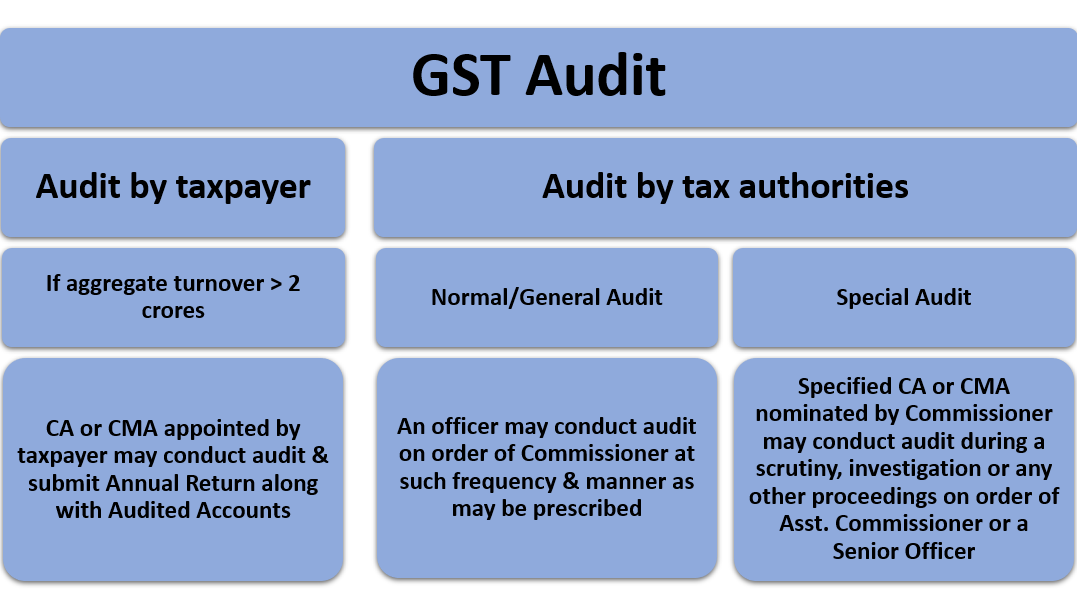 Let’s understand Audit by the taxpayer under GST regime

Who needs to get accounts audited under the GST regime?

A registered taxable person/assessee whose annual aggregate turnover during a financial year exceeds Rs. 5 Crores is mandatorily required to get accounts audited.

Note: GST Audit/ Reconciliation Statement in Form GSTR 9C is mandatory to be furnished only for the taxpayers whose aggregate annual turnover exceeds Rs. 5 Crores in the financial year. The turnover limit was increased from Rs 2 Crores to Rs 5 Crores vide a CGST Notification no. 16 dated 23rd March 2020.

Who can conduct the GST audit?

GST audit shall be conducted by either a Chartered Accountant or a Cost Accountant.

Note: A chartered accountant who undertakes an assignment of internal audit cannot conduct the GST Audit simultaneously. The same was announced by ICAI on 28th September’2018.

What all documents need to be filed electronically?

After conducting the audit a Chartered Accountant or Cost Accountant has to electronically file on GST portal the following:

latest by 31st December following the end of the financial year.

What is the remedy for error/mistakes made in GST returns filed for the previous year?

If an assessee has committed any mistake in any of the GST returns (GSTR-3B, GSTR -1) filed for the previous year then the same can be rectified subject to payment of interest along with applicable tax LATEST by

⇒The due date for filing of the return(GSTR-3B) for the month of September following the end of the financial year i.e. 20th October or

⇒ The actual date of filing the annual return (GSTR-9B)

For e.g., if an annual return is filed before 20th October’18 then the last date for rectification is the date of filing the annual return.

Note: Rectification of error is not permitted to the assessee in case of errors which are detected by tax authorities during the special audit.

Post Views: 2,354
Share This Post
About CA Ankita Khetan 165 Articles
Ankita is a Chartered Accountant in practice and holds a Diploma in IFRS (from ACCA, UK). She is also a Commerce PG and Certified Independent Director (from IICA). She holds a certification in Forex and Treasury Management. Her area of expertise is GST and Income tax. She is passionate about reading, writing, and sharing knowledge on areas related to finance and taxation.
Website Facebook Twitter LinkedIn