What is Soiled Currency?

A currency note which has become dirty due to normal wear and tear or two pieces of the same note are pasted together and it forms almost the entire note with no essential feature missing.

What is Mutilated Currency?

A currency note which is damaged/or a portion of the note is torn/missing, which makes it difficult to ascertain the value of the currency.

Will one get full refund for a mutilates/soiled/defective note?

Exchanging and fetching full/ half or nothing at all will depend upon the level of damage of the currency note.

What was the need for the amendment?

Though RBI (Note Refund) Rules, 2009 were amended on July 3, 2017, for the exchange of soiled/ mutilated/defective currency notes irrespective of their denomination. Banks did not accept/exchange the soiled/mutilated/defective notes of Rs. 2000 and Rs. 200 claiming that there was no specific mention for the new notes. As the bank was not notified how much refund (full/half) needs to be granted which depends upon the minimum area of a single largest undivided piece of the note. Further, the banks advised the public to hold such currency notes till RBI issues an amendment for the same.

This made it almost impossible for the public to get their soiled / mutilated /defective notes of Rs. 2000 and Rs. 200 exchanged. To counter the hardship faced by the public, RBI has now come out with the amendment to exchange and refund in Rules to include new denomination notes (Rs. 2,000 & Rs. 200) and new Mahatma Gandhi series notes (smaller size) which are issued post-demonetization. 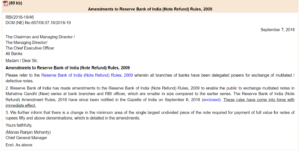 Where the notes can be exchanged?

For the benefit and convenience of the public, RBI has authorized RBI offices and all the branches of the banks (including cooperative banks and Regional Rural Banks) across the country to accept, exchange and pay the exchange value either in full or half, depending upon the condition of the currency. All the designated banks should provide the exchange facility without any discrimination to the public on all working days. None of the banks or their branches should refuse to accept smaller denomination notes or coins.

What is the minimum area of the note required for the full/half refund?

The stipulated limit for full/half refund by RBI

If the currency notes are damaged/soiled/mutilated beyond the above-stipulated limit set by RBI then nothing will be refunded in exchange for it.

What if the currency note is fake/duplicate?

Every banknote issued by RBI has various security features/parameters. Lack of any such security feature/parameter will make a note a fake/duplicate/counterfeit note. The status of such a note will always remain the same. It will have no value, will never be considered legal tender.

Banks have the right to impound a fake/duplicate/counterfeit note and issue an acknowledgment of the transaction in a prescribed format as and when it is noticed. If such fake notes are returned by the bank to the customer (on request or otherwise) it would amount to willful involvement and the bank will also be penalized.

What if the currency note is extremely brittle, burnt, charred, stuck up notes?

Bank branches do not accept currency notes which are extremely brittle or are badly burnt, charred, or inseparably stuck up together. Such notes are not fit for normal use and that is why these notes are to be taken to the concerned Issue Office where they will be adjudicated under a Special Procedure.

Post Views: 2,172
Share This Post
About CA Ankita Khetan 164 Articles
Ankita is a Chartered Accountant in practice and holds a Diploma in IFRS (from ACCA, UK). She is also a Commerce PG and Certified Independent Director (from IICA). She holds a certification in Forex and Treasury Management. Her area of expertise is GST and Income tax. She is passionate about reading, writing, and sharing knowledge on areas related to finance and taxation.
Website Facebook Twitter LinkedIn

The U.S. may remove India from Currency Monitoring List

Share This PostAnnual Return of GST An annual return is to be furnished once a year by all the registered taxpayers under GST. It is a consolidated return requiring the information of SGST, CGST and […]

Error in GSTR 1 or GSTR 3B correct in GSTR 9

Share This PostError in GSTR 1 or GSTR 3B correct in GSTR 9 As GST was new for everyone, numerous errors have been made in filing the GST returns for the financial year 2017-18. It […]