How to unblock the GSTIN on EWB Portal?

For the implementation of Rule 138E of CGST Rules, 2017, a new feature has been developed on the E way bill portal. The new feature on the E-way Bill system will function in coordination with Common GST Portal. It will continuously communicate with the GST portal to figure out the GST return filing details of taxpayers.

Details of the new feature on the e way bill portal

Will the taxpayer be sent an alert message who has not filed GST returns?

Yes, an alert message with a cautionary message will pop-up while generating e-way bills in case of the taxpayers who have failed to file GST return (GSTR 3B) for the past 2 consecutive months.

But this alert message does not mean it will block or stop the taxpayer to generate an e way bill. But if the taxpayer fails to furnish the GST return after the lapse of the due date then from next month onwards, such taxpayers will be blocked.

How many days does it take to unblock a GSTIN on the E way bill portal?

As a standard procedure, GSTIN will be unblocked within a day on the E way bill portal. Once the taxpayer files the pending GST Returns (GSTR 3B) on the GST Portal. E way bill portal will automatically be updated and seamless generation of e-way bill will continue.

For e.g, If a taxpayer files the pending GST returns on say 1st December 2019, then the GSTIN will be unblocked on 2nd December 2019.

How can GSTIN be unblocked immediately upon filing the GST returns?

If a taxpayer intends to unblock it immediately after filing the GST returns then the following needs to be followed:-

Step 2: From the drop-down options of “Search” > Click on “Update Block Status” 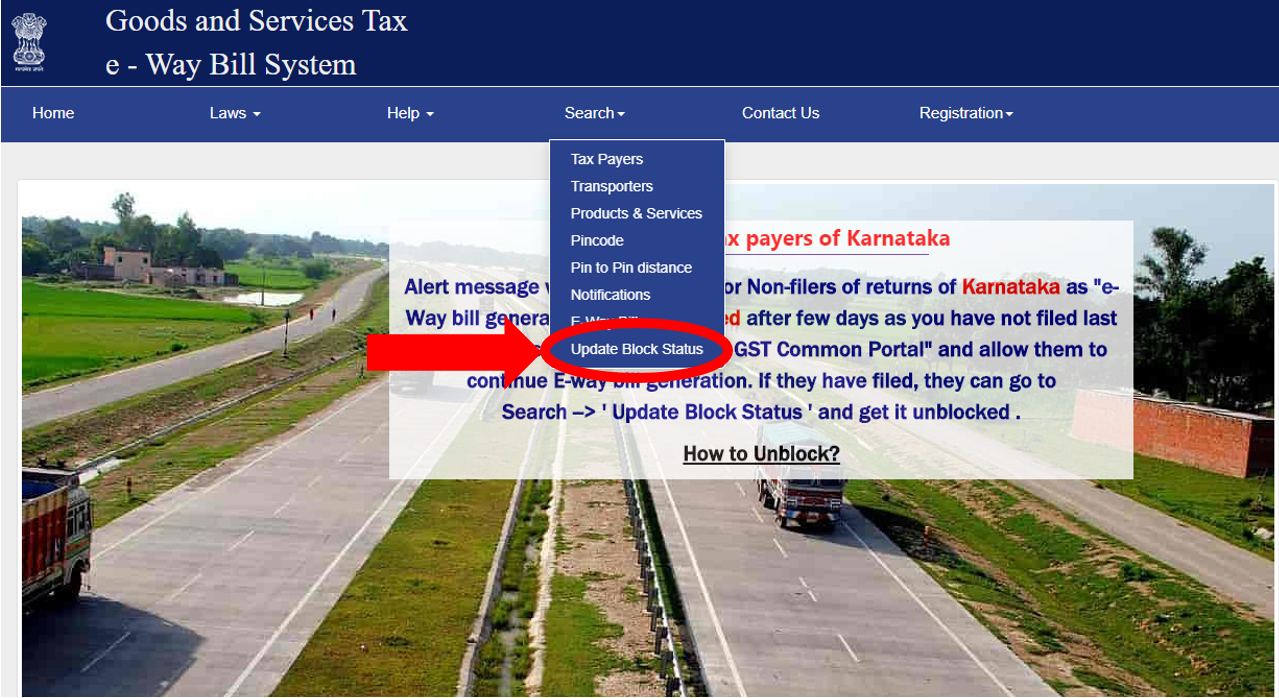 Step 3: On this page “Check Unblock/ Unblock Status of GSTIN”

Step 4: After filing the above details and clicking on “Go”  it will display the following details

In order to immediately unblock the status on the e-way bill portal, the taxpayer has to click on “Update Unblock Status from GST Common Portal” (as pending GST returns(GSTR 3B) are already filed but the system takes one day to update) 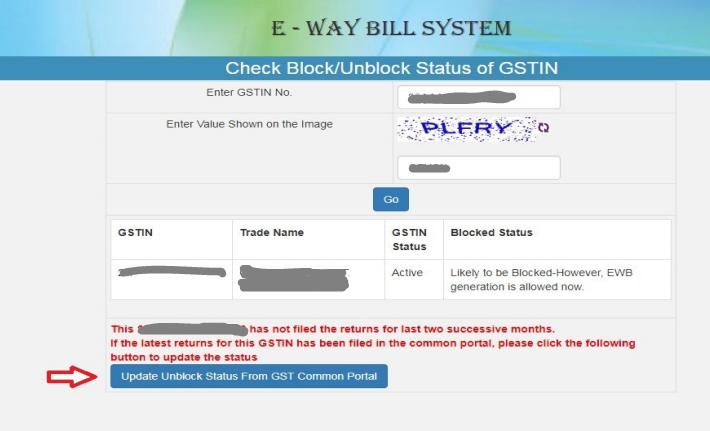 What if the GSTIN is still blocked, after filing the GST returns and also trying to update the GSTIN from the Common portal?

As a last resort, the taxpayer can raise a complaint about resolving the issue/case by contacting

Question 2: From which date the defaulter/non-filer will be blocked from generating e way bills? Due date of GSTR 3B or some other date?

(As per my understanding from the FAQs issued, the effective date for blocking the GSTIN of a defaulter will be the next month from the consecutive default of two months)

Question 3: Why the implementation of Rule 138E  requires the filing of GSTR 3B  and not GSTR 1 for a regular taxpayer?

Question 4: As per my understanding from the statements published in “The Blocking/Unblocking of E-Way Bill generation” on 12.11.2019  by the National Informatics Centre. If the generation of e way bill is allowed to the defaulters/non-filers, then the whole purpose of blocking and implementation of Rue 138E will be defeated.

“In case the user hasn’t filed the Returns for the last two successive months and clicked on the update button, a pop-up message as shown below will appear.”

Whereas, my understanding regarding the implementation of Rule 138E is No GST Returns = No E way Bills.

Why composition taxpayers are ignored?
Post Views: 2,239
Share This Post
About CA Ankita Khetan 165 Articles
Ankita is a Chartered Accountant in practice and holds a Diploma in IFRS (from ACCA, UK). She is also a Commerce PG and Certified Independent Director (from IICA). She holds a certification in Forex and Treasury Management. Her area of expertise is GST and Income tax. She is passionate about reading, writing, and sharing knowledge on areas related to finance and taxation.
Website Facebook Twitter LinkedIn